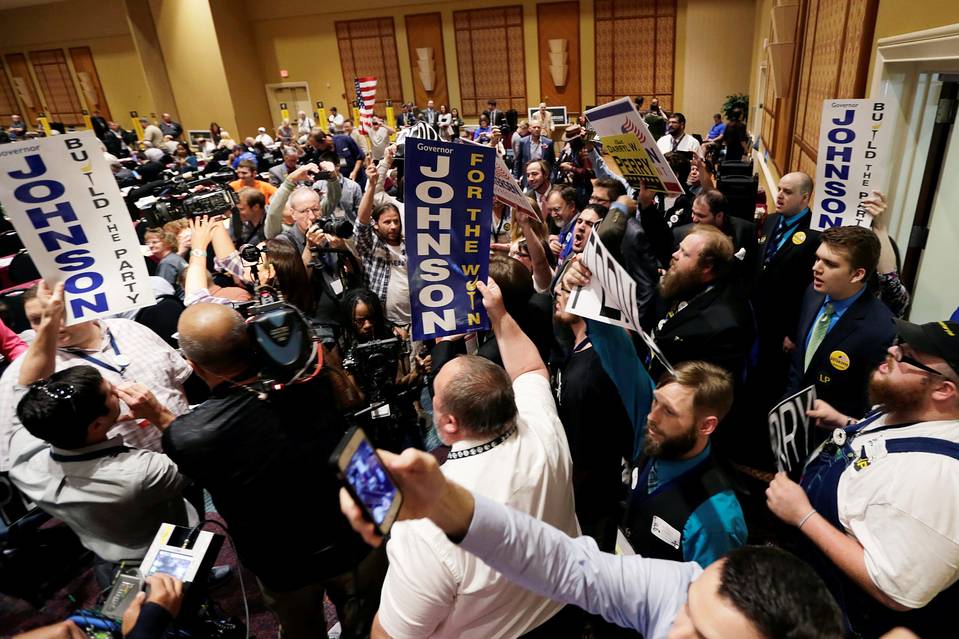 Attendees at the Libertarian Party National Convention cheer for their candidates at the Rosen Centre in Orlando, Fla., on Sunday.  PHOTO: KEVIN KOLCZYNSKI
By BYRON TAU
Updated May 29, 2016 8:59 p.m. ET
ORLANDO, Fla.—The Libertarian National Convention on Sunday chose a pair of former Republican governors as their presidential and vice presidential nominees, putting forward the most-experienced election ticket in the party’s four-decade history.

By selecting a ticket composed of veteran Republican officeholders, Libertarians were hoping to present voters with a credible alternative to presumptive GOP nominee Donald Trump and Democratic front-runner Hillary Clinton, both of whom are likely to enter the fall election as the most unpopular presidential candidates in modern history.

Still, with opinion polls showing more Americans open to a third-party candidacy in 2016 than ever before, Libertarians say they hope to draw from a well of disaffected Republican, Democratic and independent voters. The party is also likely to be the only third-party option on the ballot in all 50 states this fall. 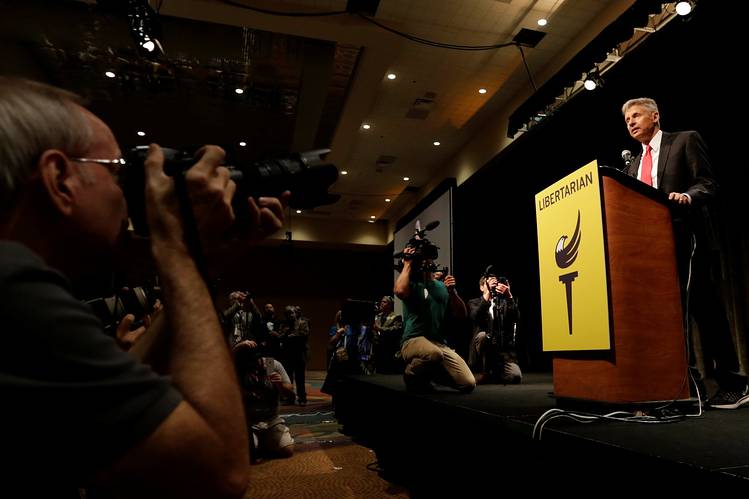 Libertarian Party presidential candidate Gary Johnson gives acceptance speech during National Convention held at the Rosen Centre in Orlando, Fla. PHOTO: KEVIN KOLCZYNSKI/REUTERS
Together, Messrs. Johnson and Weld have more than a dozen years of governing experience. Mr. Johnson was a popular two-term Republican governor of New Mexico, best known for his expansive use of the veto during his eight years in office and his support for the decriminalization of drugs. He ran for president in 2012 as a Republican before switching to the Libertarians, capturing the party’s nomination and garnering nearly 1.3 million votes in the general election—the party’s best showing yet.

“Fifty percent of Americans right now are registering themselves as independent, meaning new voters are registering themselves as independents. Where’s that representation? Well, I happen to think it’s libertarian,” Mr. Johnson told reporters. “I happen to think that most people in this country are libertarian, they just don’t know it. Here’s the great opportunity leaving here today.” 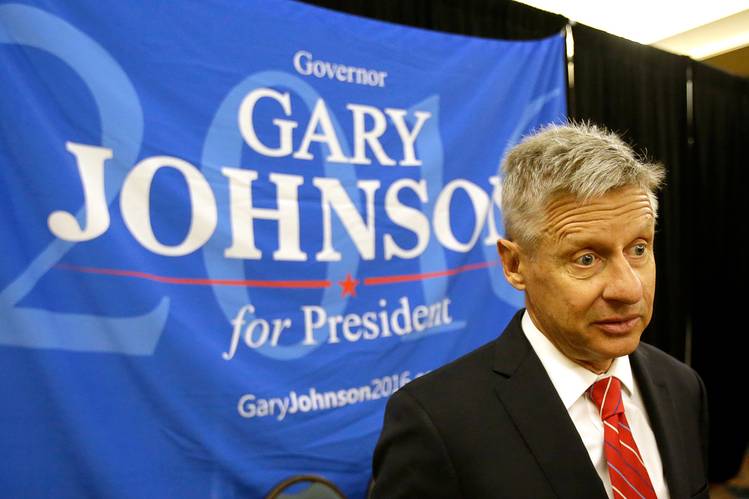 This year, a handful of scattered polls that included Mr. Johnson’s name shows him polling about 10% in a three-way race against Mrs. Clinton and Mr. Trump.

Nicholas Sarwark, chairman of the Libertarian Party, on Sunday said the party is now looking to make inroads into the class of donors that usually bankrolls Republican candidates, including billionaires David and Charles Koch. “There’s backchannel communications to suggest to the Koch brothers that the return on their political investment would be a lot higher in the Libertarian Party, and we align better with their values than the Republican Party,” Mr. Sarwark said.

Meanwhile, Steve Lombardo, chief communications officer for Koch Industries, said: “Rumors or innuendo that Charles or David Koch have engaged in discussions or have pledged their support to Gary Johnson—or any candidate running for president for that matter—are simply untrue.”

The path for Messrs. Johnson and Weld to the Libertarian nomination was far from smooth. Mr. Johnson fell short of a majority on the first ballot, necessitating a second vote in which he prevailed. Mr. Johnson also repeatedly implored the delegates to make Mr. Weld his running mate.

‘This weird, wacky election season may be a once-in-a-lifetime opportunity.’
—Channing Brown, 58, a delegate to the Libertarian convention.
Mr. Weld’s nomination was in doubt throughout the weekend, as delegates wrestled over whether he was libertarian enough to represent the party.

The two men ran a weekend gauntlet of tough questioning from Libertarian activists who eyed Mr. Weld skeptically because of his lack of previous involvement in libertarian causes, as well as heterodox stances on gun control, free trade and foreign policy.

The convention was an unusual spectacle by the standards of typical American political gatherings, even in an election year where a reality-television star has catapulted to an almost-assured Republican nomination.

Indeed, a large comic book, science fiction and anime exposition was being held adjacent to Libertarian convention, leading delegates to mingle in the hotel with a steady stream of people dressed in costumes depicting characters, such as Pokémon’s Pikachu and Star Wars’ Han Solo.

The Saturday evening presidential debate featured Mr. Johnson and four rivals answering pointed questions reflecting libertarian concerns about the size and scope of government, such as whether governments should require drivers to hold licenses, whether children should be allowed to use or purchase narcotics, and there even was a question about whether the two World Wars were a mistake. Libertarianism advocates far smaller government reach on social and economic issues and an American foreign policy that avoids military conflicts abroad.

Mr. Johnson was the only candidate on stage to assert that governments should require basic competency for people who operate an automobile. For that he drew scattered boos and heckling.

In a libertarian version of the well-known state-by-state roll call that also occurs at the Republican and Democratic conventions, delegates boasted about how much freedom their states allowed their residents. Nevada’s delegation said their state was the freest because of legalized prostitution and gambling, while New Hampshire’s delegation boasted of its lack of a mandatory seat-belt law. Illinois delegates noted their state is one where “we put our governors in prison.”

Still, discussions at the convention reflected the same dilemma confronting this year’s Democratic and Republican party primaries, with voters torn between making a pragmatic choice or one that is purely ideological. Ultimately, however, Libertarian delegates apparently couldn’t pass up the opportunity to nominate what could be the most-viable ticket in their party’s history.

“This weird, wacky election season may be a once-in-a-lifetime opportunity,” said Channing Brown, 58 years old, a delegate to the convention.

Join Donald Rainwater (2020 Libertarian Gubernatorial candidate and founder of Liberty Is Essential) and Evan McMahon (LPIN Development Director) for a response and discussion to the State of the State in Indiana. ... See MoreSee Less

State of the State Response

Libertarian Party of Indiana was live.

In the first episode of 2021, we'll be talking with the Tracy and Kenneth at Turn Away No Longer and hear about their mission to provide care packs for children in the Indiana foster care system.

There are nearly 14,000 children in the foster care system in Indiana. Many lose everything during their transition. Turn Away No Longer aims to help comfort these children during a traumatic situation by providing care packs with essential items and toys. ... See MoreSee Less

This is great! My wife and I are working on bringing an Isaiah 117 House to Tippecanoe County which is a nonprofit that serves as a pre-transitional home for foster kids when they are first removed. Providing kids with these care packs is a wonderful thing

Thank you all!! Foster care is near and dear to my heart. Love what you're doing!

Right. It's only been around a few years

So if a child in foster care turns 18 and are still in high school. DFS puts them out of the foster home?

Non-aggression is our core principle and all Libertarian Party members agree to this statement before joining. If you're sick of the old parties supporting violence as a solution to peaceful problems, check out our platform at LP.org and LPIN.org ... See MoreSee Less

That’s not very, uhm, liberty focused of you, now is it? And this is why libertarians never get anywhere or get anything. I get it, we’re the best of both the worst of neither. We’re right in the middle. But you know what else? Fence sitters get nothing done. Peaceful protests have never accomplished anything more than being ignored and forgotten about.

Arguing with each other is just another trick used by the deep state to keep control. Unity is more powerful than violence.

Nope sometimes force is the answer, when the question is tyranny

Thankfully the opinion of this page and it's admins doesn't reflect the views of the majority of libertarians with a backbone who would stand against a tyrannical government in defense of liberty.

Sounds like you're saying that if it was up to Libertarians, we'd still be under British rule. I thought I was a Libertarian but I guess I was wrong.

I don't support violence but you have to recognize when it's inevitable and prepare yourself.

The Capitol violence came from Antifa. Try to keep up, guys..

I think while I I would not be involved in it myself that politicians very much need to see the wrath of voters now and then just to keep them honest.They feel like they are not accountable otherwise.I guarantee the news events of today are raising some concerns among weasle politicians.

Maybe we should have wrote a strongly worded letter to the British.

Force against a tyrannical government is self defense.

Weakass libertarian. I don’t believe in violence until I know the country is being taken by communists.

Who wrote this garbage and how much of my money are they getting?

There are times when violence is the only answer left. I don't think its too that point.

Is there something you still have that you're willing to compromise away? Maybe wait it out? Maybe be methodical while you're getting pieced up?

Break into my house and you’ll see the ultimate in sadistic aggression. #dontfuckaround #gonnafindout

Unless it's aggression on a fetus, and then you're okay with it, right, Libertarian Party of Indiana?

So the libertarian platform is to bend over and take it?

Agreed, but what about against tyranny from all sides?

Membership
The Libertarian Party is committed to America’s heritage of freedom: individual liberty and personal responsibility, a free-market economy of abundance and prosperity, a foreign policy of non-intervention, peace and free trade.