Today, appointed Indiana Secretary of State Holli Sullivan violated Indiana’s election law prohibiting fundraising during a budget session when she announced her campaign for SOS and solicited and accepted campaign contributions on Facebook.

“Now more than ever, we need conservative leadership to defend our elections and fight for Indiana’s future. Watch my message to Hoosiers below, and join me in our campaign! Sign up today for updates and to volunteer at [link removed] or donate at [link removed],” part of the Facebook announcement made by Secretary of State Holli Sullivan on April 26th at 12:02 PM. 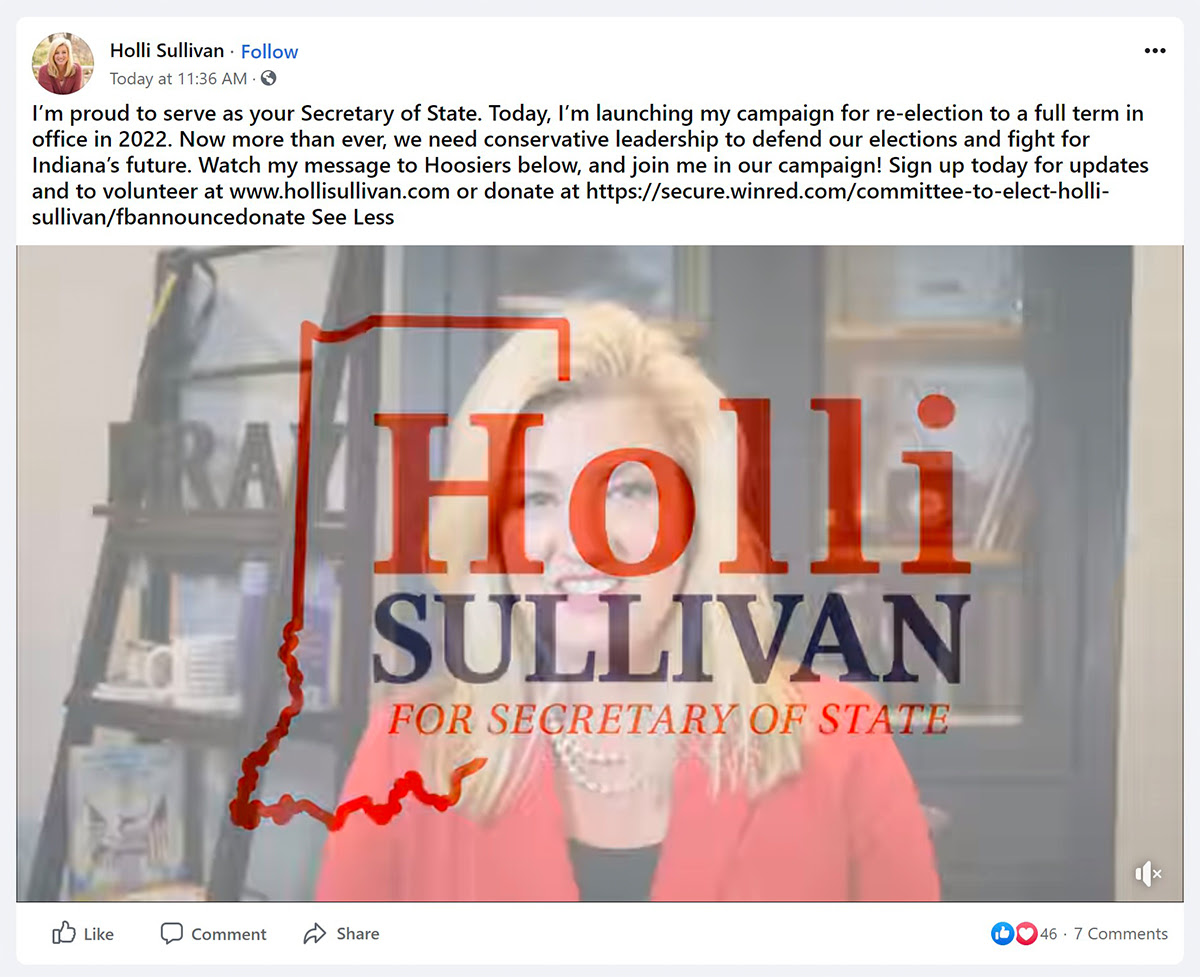 Under Indiana Code 3-9-2-12 candidates for the legislature or any statewide office, such as Secretary of State, are prohibited from soliciting or accepting campaign contributions from the start of the budget session until after the legislature has adjourned sine die. This is to prevent corruption of the budget process through campaign contributions.

This 2021 legislative session, like most things this year, was unique and complicated. Under the Indiana Constitution and state statute, the legislature is required before they adjourn the session to redraw the political district maps based on the completed US census data. However, the US Census data, completed every ten years, was not completed on time due to Covid. The final population and demographic numbers aren’t expected to be received from the US Census Department until the end of September.

With that delay and Constitutional obligation, the Indiana General Assembly decided to not adjourn, but instead recess until the redistricting has been completed or by November 15th at the latest.

Anticipating these types of issues, the Indiana legislature amended and passed House Bill 1372 to create new deadlines and relax these type of campaign prohibitions. However, HB 1372 has not been fully enacted as the Governor has not signed it into law and could still veto it to insulate Sullivan from her violation of the law.

Even if Governor Eric Holcomb had already signed the bill into law Secretary Sullivan would still be in violation of the law. The amended law keeps the prohibition on fundraising in place through April 29th. With that Sullivan’s Facebook post and video on April 26th soliciting and accepting campaign contributions for her “first full term” as Secretary of State is in violation of the law.

“If you are vying to be elected to head the office that oversees elections and enforces campaign finance laws it would probably be a good idea to not break those laws,” said Evan McMahon, Chair of the Libertarian Party of Indiana.

To avoid the appearance of impropriety and to maintain the integrity of the office, the Libertarian Party of Indiana calls on Secretary of State Sullivan to recuse herself and her office, which includes the Indiana Election Division, from investigating and adjudicating this matter.